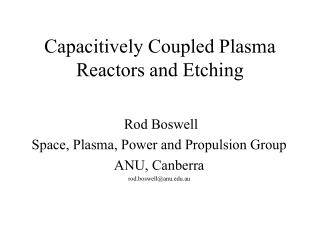 Complex Plasmas as a Model for the Quark-Gluon-Plasma Liquid - . markus h. thoma * max-planck-institute for

Toward the theory of strongly coupled Quark-Gluon Plasma (sQGP) - . edward shuryak department of physics and astronomy

Trenches… - . chris seymore. questions…. what are the two difficulties associated with etching trenches? how does