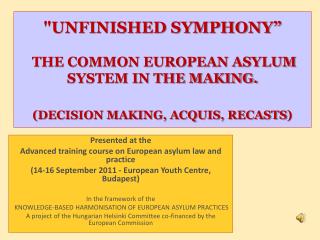 "UNFINISHED SYMPHONY” THE COMMON EUROPEAN ASYLUM SYSTEM IN THE MAKING. (DECISION MAKING, ACQUIS, RECASTS ). Presented at the Advanced training course on European asylum law and practice (14-16 September 2011 - European Youth Centre, Budapest) In the framework of the Decision-making Process in the European Parliament

Decision Making - . today you will . . . practice strategies to help you be mindful about major spending decisions.

Making the Right Decision - . “the problem is never how to get innovative thoughts into the mind, it is how to get the

The Decision-making Process - . thoughts, ideas and practice. decision-making. as defined by baker et al in their 2001