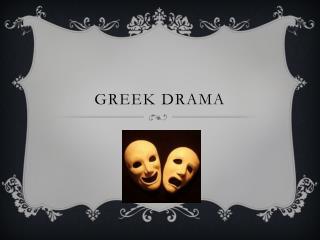 Greek Drama. Tragic Hero. A character, usually of high birth, neither totally good or bad, whose downfall is brought about by some weakness or error in judgment. Hubris. Arrogance or overwhelming pride which causes the hero’s transgression against the gods. Tragedy. Herbie - . rod serling. what type of genre?. science fiction drama teleplay. what is a drama?. it is a play!. what is

Introduction to Drama - . the writing and reading program at western new england college. definition. unlike short

Ancient Greek Theater - . this is where it all began: the theatre of dionysus in athens. . scope of

Greek Drama - . the earliest of representative fiction. an overview:. the ancient greeks invented the theatre and wrote