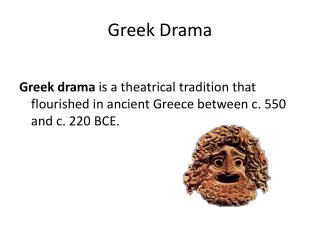 Greek Drama. Greek drama is a theatrical tradition that flourished in ancient Greece between c. 550 and c. 220 BCE. How Did It Start?. Drama was built on religion The cult of Dionysus (the god of fertility and wine). Greek Drama Theater - Origins of drama. greek drama reflected the flaws and values of greek society. in turn, members of

Elements of Drama - . drama. the word drama comes from the greek verb dran , which means “to do .” the doing/acting

History of Drama - . greek drama. origins of greek drama. began in the 6 th century b.c. as part of the worship of the

Drama - . an introduction. what is drama. drama comes from greek words meaning &quot;to do&quot; or &quot;to

Quick Write - . please write a paragraph, or more, in response to the following question:. what are your preconceived

DRAMA - . a history. drama : a specific form of fiction that is demonstrated through performance. the term “drama”

DRAMA - . drama evolves over time and across cultures. drama all over the world began as religious ritual. greek drama,

Background on Greek Drama and Oedipus Rex by Sophocles - . review: sophocles and greek drama. how was greek drama born?

BELLWORK - . what were the themes of greek society? how were those incorporated into greek culture? explain the advances