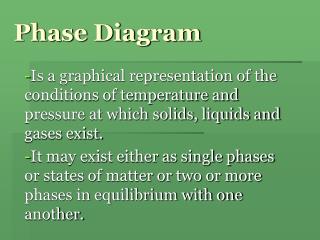 Phase Diagram. Is a graphical representation of the conditions of temperature and pressure at which solids, liquids and gases exist. It may exist either as single phases or states of matter or two or more phases in equilibrium with one another. Phase Diagram for Iodine. Phase Diagrams.

Effect of the Solid Phase on the Global Phase Diagram of Lennard-Jones Mixtures - . brian c. attwood and carol k. hall

Phase diagram - . need to represent how mineral reactions at equilibrium vary with p and t. p-x stability and mixing.

Phase Transitions - . the above picture shows a block of solid ar melting and subliming after exposur to aire at roughly