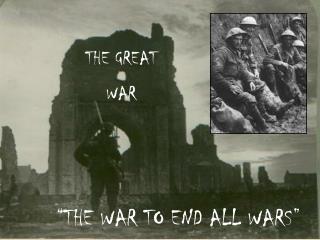 THE GREAT WAR. “THE WAR TO END ALL WARS”. Bellwork #1 – ½ pg response. Should you always support a friend no matter what he or she does? What is the risk of not supporting a friend? Read over the activity instruction sheet. The Great War - . ‘the lamps are going out all over europe. we shall not see them lit again in our lifetime’ sir

The Great War - . why did it happen? aka causes of wwi. nationalism. positive effect= unity within a country negative

The Great War - . by: heather henderson and shelly smith. the road to world war i. military draft. the significances of

The Great War - . student objective. students will gain an understanding of the way world war 1 affected utah and of the

The Great War - . the united states in wwi. bell ringer:. do you think that it would have been possible for the us to

The Great War - . factors contributing to the war. inability to adjust to change. industrialization  led to

“The Great War” - . or, &quot;some damn foolish thing in the balkans,” (says otto von bismarck) that sets off

The Great War - . who? what? where? when? why?. v ideo retrieved from: https://www.youtube.com/watch?v=_xpzq0lalr4 crash