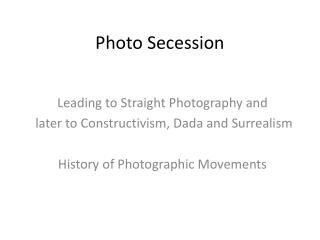 Photo Secession. Leading to Straight Photography and later to Constructivism , Dada and Surrealism History of Photographic Movements. Photo-Secession:. The first influential group of American photographers that worked to have photography accepted as a fine art. .

Secession and Civil War - . “a house divided against itself cannot stand…” the fight to preserve the union.

The Secession Crisis - . the dominoes begin to fall. south carolina secedes. after lincoln’s election, but before his

Secession and War - . 15.4. 1860 election. one huge question would the union break up? issue of slavery was rearing its

Secession - . union theory vs. compact theory. on your paper: while we are reading the 2 theories make notes of their

The Road to Secession - Please take out quiz 4 and focus 18. take the first 10 minutes of class to fill out the scantron

15.4 Secession and War - . the election of 1860. the entire country wondered if the union would stay together northern

Secession - . standard 4.3. slave labor. since the english introduced slave labor back in the 1600s, sc’s agricultural

SECESSION CRISIS 1860 - . vocab: secede means?. why did sc secede?. a convention was formed by “fire-eaters”,

Election of 1860/Secession - . standard 4.2 e.q. what lead to the secession of the south? . lincoln- douglas debates.

Secession - . chapter 18.4. the raid on harper’s ferry. john brown planned a raid on a federal arsenal in harper’s

Bellringer —Secession - . complete the reading check questions. you may use your text. you may not get or receive help

Secession and War - . after john brown’s raid on harper’s ferry, the south blamed the republican party the issue of