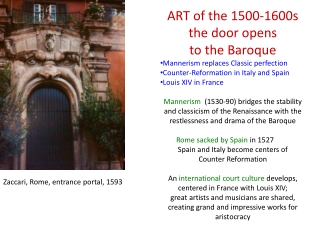 Intelligence of the 1600s - . by jordan buhler. learning. children in the 17th century were taught by their parents or

MASHCAND - The key that opens the door to your dream job - Mashcand is the app designed for this only. after registering

THE BAROQUE - . the baroque 1600-1750. comparison of renaissance and baroque styles a simplification of musical style:

THE BAROQUE - . the baroque.

THE PURSUIT OF PERFECTION - . america: past and present chapter 12. the rise of evangelicalism. separation of church and

The Fires of Perfection - Lyman beecher, celebrity minister, who inspired his eleven children to take leading roles in

Baroque Art - Abigail modlin project one . baroque art. this will be done in a computer lab. it is highly encouraged to

THE FIRES OF PERFECTION - . culture and reform american history through 1865. two basic impulses: optimistic faith in