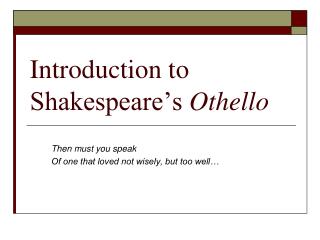 Introduction to Shakespeare’s Othello. Then must you speak Of one that loved not wisely, but too well…. William Shakespeare. Born in April 1564 in Stratford-on-Avon Received a classical education including Latin, Greek, history, math, astronomy, and music Most likely began as an actor Sonnet 18: Shall I compare thee to a Summer’s Day? - . by william shakespeare the ultimate love poem?. sonnet. poetry

Welcome to the District 7 Conference - . “o! for a horse with wings.” shakespeare. allen brown. coastie says…

Much Ado About Nothing by William Shakespeare - . index

Shakespeare - . ms. payne’s online shakespeare learning center. how to use!. next slide previous slide . table of