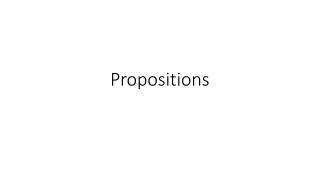 Propositions. Recap. Common Three-Way Equivalence:. Sentence meanings The objects of the attitudes The referents of ‘that’- clauses We can call whatever is all of these things a “proposition.” Now we have the question: what are propositions?. Facts.

Semantics - . in propositional logic, we associate atoms with propositions about the world. we thereby specify the

Propositional Logic - . negation. given a proposition p, negation of p is the ‘not’ of p. conjunction. representing

PROPOSITIONAL LOGIC - . logic : language for reasoning propositional logic proposition is either true or false grass is

How to develop creative propositions? - . case study of wheel lemon fresh. the problem of our lives!. does not say one