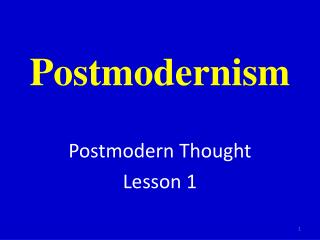 Postmodernism. Postmodern Thought Lesson 1. Philosophy – “the system of values by which one lives” (American Heritage Dict.) Everyone has a philosophy of life – we may not realize it, but every person has a way of thinking that determines how we view life.

Postmodernism - . modernity/the enlightenment. not to be confused with modernism usually traced back through the

An Introduction to Postmodernism - . prepared by logan metcalf -kelly. a distinction. postmodernity (modernity) – a

Postmodernism - . postmodernist art is characterized as a rebellion against the modern. modernism values reason, science,

What is Postmodernism? - . a complicated term a set of ideas emerged as an area of academic study since the mid-1980s it

Postmodernism - . 1945-present. learning objectives. to identify the major authors and literary contributors of the

POSTMODERNISM - . todd adams psc 314 spring 2007. what is postmodernism? the postmodern condition: a report on knowledge