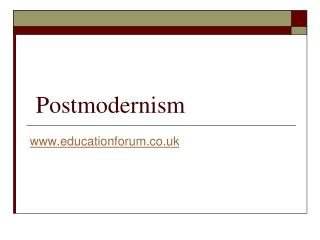 Postmodernism. www.educationforum.co.uk. What is modernism. The modern period is characterised as western society since the industrial revolution. Modernity brought with it urbanisation, class stratification, ideology, growth of the nation state and bureaucracy.

Art as an Expression of Postmodernism – Visual Expressions of the Loss of Meaning - . art defined: form and content.

EPHESIANS - . and postmodernism by roy h. lanier, jr. what we face

Postmodernism, Globalization and You! - . presentation by: mark leja, rachel evans, and jessie leibham.

Postmodernism - . postmodernist art is characterized as a rebellion against the modern. modernism values reason, science,

Postmodernism in The Road - . the end of master narratives. postmodernism: basic concepts. all versions of reality are

Postmodernism - . an overview. ideas of the enlightenment: a review. remember, these are roughly the same as the basic

ROMANS IN TODAY’S WORLD - . in light of postmodernism by roy h. lanier, jr. what the church faces

Postmodernism - . 1945-present. learning objectives. to identify the major authors and literary contributors of the

Chapter 3 - . the structure of archaeological inquiry. outline. levels of theory paradigms paradigms in archaeology is

Culture - Postmodernism. and. culture. culture. refers to patterns of human activity and the symbolic structures that

&quot;Just What is it that makes today's home so different, so appealing?&quot; (1956) - Richard Hamilton