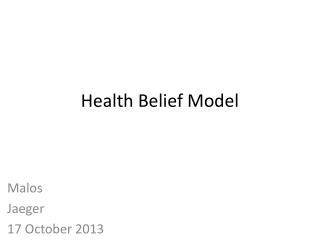 HEALTH BELIEF MODEL - . an luu. the health belief model (hbm) was developed in the 1950s and has been practiced because

The Health Belief Model - . historical origins of the model. lewin’s field theory (1935) introduced the concept of

The Health Belief Model - . factors influencing patient compliance. introduction. half of medical advice is not taken up.

Health Belief Model / Protection Motivation Theory - . ephe 348. history of the hbm. developed in the 50’s by the u.s.

BELIEF - A set theory analysis of belief, knowledge and reality. belief. belief. acceptance of a proposition as true not

Model structure uncertainty A matter of (Bayesian) belief? - . all models are wrong... but anyway, how further?.

An application of the Health Belief Model to understanding use of child restraint practices - . melissa johns prof.