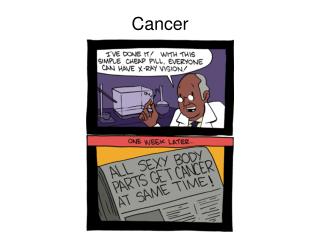 Cancer. Learning Objectives. By the end of this class you should understand: The steps required for a cell to become cancerous The link between genes, mutation and cancer The models of retinoblastoma, breast cancer, and colon cancer Translocation events that create a risk for cancer

Cancer - . cancer named by hippocrates – crab cancer is not just one disease but rather a group of diseases. all forms

Diet and cancer prevention - . extension. learning objectives. to understand how cancer develops. to know about the

What is cancer? - . cancer is not just one disease more than 200 different types of cancer have been identified. cancer.

Bone Cancer - . development of bone cancer. advancing age and a previous history of cancer are the two most important

What causes cancer? - . cancer – basic information. there are over 200 types of cancer! there are many different ways

OUR CANCER PATIENTS - . communication and support. our cancer patients. the somerset cancer user group reports have

Cancer Research - . by: tyler mosley. lung cancer. lung cancer is the leading cancer killer in both men and women in the

Best Lung Cancer Hospitals in India | Get Free Appointment at ElaCancer - Lung cancer begins in the cells of the lung. a