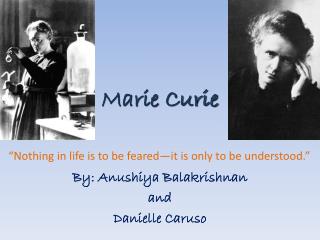 Marie Curie. By: Anushiya Balakrishnan and Danielle Caruso. “Nothing in life is to be feared—it is only to be understood.”. Scientist’s Life. Born November 7, 1867 in Warsaw, Poland Named Maria Sklodowski – changed to Marie

Marie Curie - . hanan. early life. born november 7,1867 in warsaw, poland. she was the youngest of 5 children they were

Marie Curie - . by lupine. intelligent. at age 24 she was going to the university of paris then she went to sorbonne, a

Marie Curie Pierre Curie - . by: in jae chung. early life. marie curie was born on november 7, 1867 in warsaw. both of

MARIE CURIE! - . by isabella sumsion and molly campbell. family life . birth- 7 th november 1867. she was the youngest of