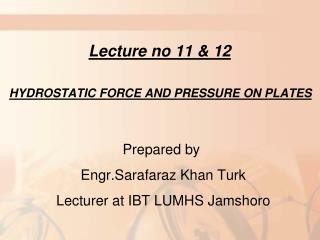 Lecture no 11 & 12 HYDROSTATIC FORCE AND PRESSURE ON PLATES Lecture no 11 & 12 HYDROSTATIC FORCE AND PRESSURE ON PLATES

Unit 4 Sections A.4-A.6 - . in which you will learn about: definition of pressure units of pressure applications of

Standing Up to Peer Pressure - . what is peer pressure?. social pressure by members of one's peer group to take a certain

The General Circulation of the Atmosphere - . weather with different scales. what we need to know for today. pressure

Kinetic Theory of Gases - . physics 202 professor lee carkner lecture 13. what is a gas?. but where do pressure and

Pressure Measurements - . pressure definition. pressure is the action of one force against another over, a surface. the