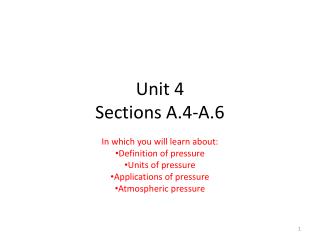 Unit 4 Sections A.4-A.6. In which you will learn about: Definition of pressure Units of pressure Applications of pressure Atmospheric pressure. A.4 Pressure. In everyday language, the word pressure can have many meanings Feeling too busy Feeling forced to behave a certain way