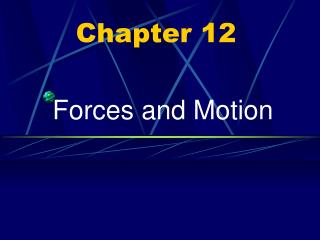 Chapter 12. Forces and Motion. Force. Force is a push or a pull. Force. A force can cause: A resting object to move Accelerate a moving object By changing the object's Speed Direction. Measuring Force. Measuring Force. lbs - Pound. N - Newton. Earth.