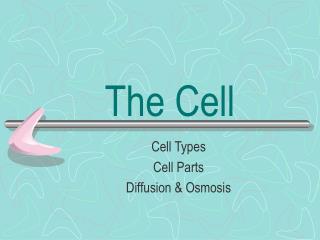 The Cell - . i . cell theory. early 1600s - compound microscope invented. 1. made it possible for people to discover and

The Cell - . by alex vo and adnan abbuthalha. what’s a cell?. all living things are broken down into tiny little dots

THE CELL - The basic unit of live. the cell. that it is capable of surviving by itself, every organism on the planet is

The Cell in its Environment - . lesson 4, chapter 1. diffusion. diffusion is the main method by which small molecules

The Cell - . the 3 principles of cell theory: the cell is the basic unit of life all cells come from pre-existing cells

The Cell - . and its organelles. the cell. the basic unit of structure and function in living things. what are

The Cell - . empty slide to keep flashcards in order. what is a prokaryote?. prokaryote ?. no nucleus or membrane bound

The Cell - . chapter 4. cells. marks the boundary between the “ living and the dead ” structural and functional unit

The Cell and its Environment - . chapter 3 section 2 p.80-85. cell membrane. it selects what comes in and goes out. it is