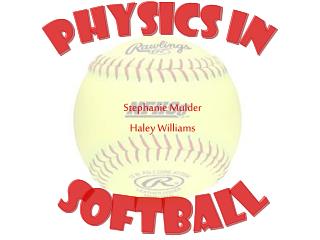 Physics In. Stephanie Mulder Haley Williams. Softball. History. Softball was started in 1887 when two colleges played baseball indoors with boxing gloves and “soft balls.” In 1926 it was officially named softball. Minor changes have been made since then in the field size and base spacing. Karel Mulder, - Developing a spatial- and technology - policy to provide domestic comfort to the urban inhabitants of

Nanno Mulder – ECLAC - Lac-klems: a disaggregated approach to evaluate the economic and social impact of ict in latin

Haley Mechanical - We care about your comfort. it’s as simple as that. we will do whatever it takes to improve your

Animoto Haley Oxentine - . animoto is a video slideshow creation site. you can add music and your own pictures or video.

April By Haley - . animals run across the green grass covered field playing in the heat from the afternoon sun racing

Haley Paige Miller - . i was born is nanticoke hospital in seaford de. where do you live. i live in an tan duplex. who do