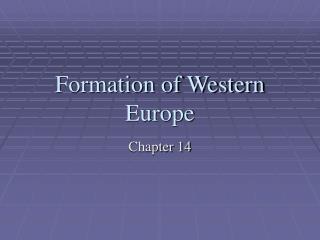 Formation of Western Europe. Chapter 14. I. The Age of Faith. Around 900s The church started massive rebuilding projects to restructure what invaders destroyed in Western Europe Still considered Middle Ages. Problems in the Church Married priests

WESTERN &amp; EASTERN EUROPEAN GOVERNMENT&amp;POLITICS - Introduction to poli/109 what is europe? europe is a