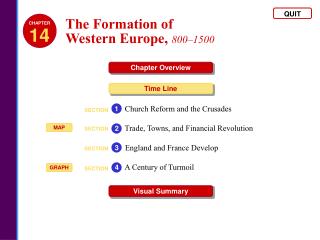 Church Reform and the Crusades - . between 1095 and 1291, the catholic church launched the crusades against the muslims

Europe 800-1500 CE - . “bring out your dead!”. formation of kingdoms role of church expansion of towns conflict

The Crusades - . by jenessa orpilla anisha varghese. what were the crusades?. the crusades are a series of holy wars that

Western Europe - . chapter 11. the countries of western europe are united by cultural and political ties. the region is

Church Reform and the Crusades - . the age of faith. a new age of religious feeling beginning in the 900s problems in the

The Crusades and Beyond - . chapter 11. the crusades are military expeditions (wars) to recapture the holy land they

UNIT 4 EUROPE IN TRANSITION - . chapter 13 – the middle ages chapter 14 – the formation of western europe. the