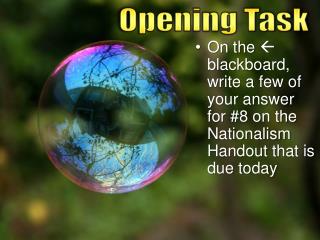 Opening Task. On the  blackboard , write a few of your answer for #8 on the Nationalism Handout that is due today. Day 79 Objectives. Evaluate what causes nationalism in a country Analyze the PERSIAGM impact of Nationalism on a country. 1. The Age of ‘isms. There are many to know!! SLRT.in - Aspects to be checked when Opening a Supermarket - Setting up a supermarket is a complex task wherein it will NEXTGEN TASK DEMONSTRATION - . this demonstration reviews how to send &amp; respond to tasks, &amp; will help you

Cartoon Essay AmStds WW I - What were the main causes of ww i in europe? using the cartoon below, explain why the balkans Task: - Holocaust: a day of remembrance. task:. can people learn from the past, or does history repeat itself? through

TASK AND PURPOSE: - To create and design a print advertisement for frillio's pizza to announce its grand opening to the