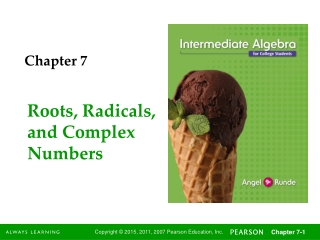 7.1/7.2 Nth Roots and Rational Exponents - . how do you change a power to rational form and vice versa? how do you

Multiplying Radicals - . you can use the product and quotient properties (foil, distributive property , etc) of square

Roots and powers - . chapter 4. 4.1 – estimating roots. chapter 4. radicals. estimate each radical, and then check the

Section 1.5 Complex Numbers - . what you should learn. how to use the imaginary unit i to write complex numbers how to

Complex Numbers - . objectives: i can d efine and use imaginary and complex numbers . i can solve equations with complex

Lesson 3.6 Complex Roots of Polynomials - . at the conclusion of this lesson you will be able to:. write complex numbers

Complex Numbers - Day 1 - . my introduction syllabus start with add/subtract like variables (without any brackets)

COMPLEX NUMBERS and PHASORS - . objectives. use a phasor to represent a sine wave. illustrate phase relationships of