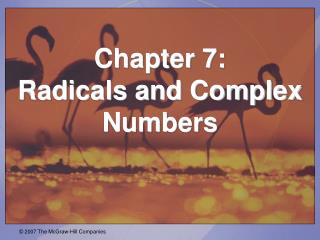 Chapter 7: Radicals and Complex Numbers. 7.1 Definition of an n th-Root. The inverse operation to squaring a number is to find its square roots. b is a square root of a if b 2 = a . All positive real numbers have two real-valued square roots: one positive and one negative. Complex numbers - . definitions conversions arithmetic hyperbolic functions. if then the conjugate of , written or is .

COMPLEX NUMBERS - Remember. complex numbers. wjec fp1 june 2008. remember. we will simplify each part in a similar way to

COMPLEX NUMBERS - . arithmetic operations with complex numbers. which complex representation is the best to use? it

Complex Numbers - . if we wish to work with , we need to extend the set of real numbers. definitions. i is a number such