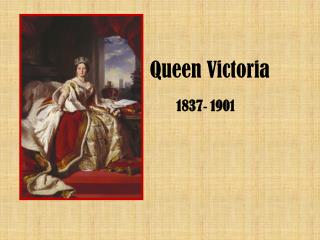 Queen Victoria. 1837 - 1901. Victoria , the only child of Prince Edward (Duke of Kent) and Princess Victoria Mary Louisa of Saxe-Coburg- Saalfeld , was born on the 24 May in 1819. Her father died eight months after she was born. Victoria Backpage - Now no need to worry for victoria-backpage users. as we know backpage is no more but there is an

QUEEN VICTORIA 1819-1901 - . childhood. victoria was the daughter of edward, the duke of kent and princess victoria of

Queen Victoria ( 1837-1901) An age of transition Thanks to industry and trade, - The victorian era. queen victoria (

Queen Victoria - . she was born on the may in 1819 at kensington palace,london. she didn't go to school but she studied

Queen Victoria's Family Tree! - . this is the family of the last victorian queen that came before our queen, queen

QUEEN VICTORIA! - . a famous victorian. why was she famous ?. victoria was famous for being the longest b ritish monarch

Who were the Victorians? - . victorians lived at the time queen victoria was on the throne. she became queen in 1837 and