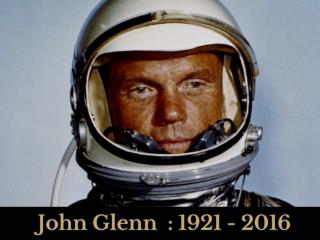 John Glenn, one of the 20th century's greatest explorers as the first American to orbit Earth and later as the world's oldest astronaut, has passed away at age 95. The Washington Conference (1921-22) - . the washington conference 1921. a conference of major naval powers met in

By Glenn A. Valdiserri, D.B.A. And John L. Wilson, D.B.A. - The study of leadership in small business organizations: