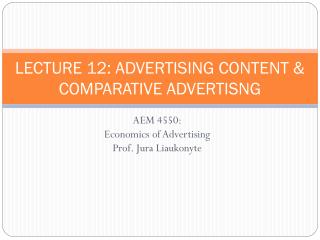 Lecture 12 - . announcements. this is the last lecture!. no more hours, make appointments with grader/mentor next week is

Lecture 12 Content - . lidar. the lidar instrument transmits light out to a target the transmitted light interacts with

Lecture 12 - . chemical reaction engineering (cre) is the field that studies the rates and mechanisms of chemical

Lecture 12 - . intergroup relations: prejudice and discrimination. outline. introduction what is prejudice? theories of

Advertising Content Analysis - . a systematic , objective , and quantitative analysis of advertising conducted to infer a