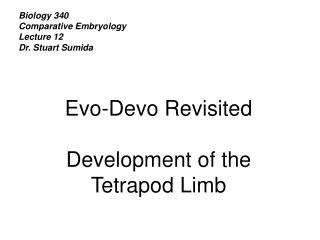 Ecology BIO 340 - . what is ecology the scientific study of the interactions that determine the distribution and

General Embryology - . lecture i. sanjaya adikari department of anatomy. our life begins as one cell formed by the union

Biology 323 Human Anatomy for Biology Majors Lecture 18 Dr. Stuart S. Sumida - . from the head to the neck (or was it

GENERAL EMBRYOLOGY - . gastrulation notochord formation. learning objectives. to learn about the process of