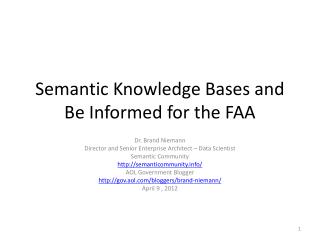 Semantic Knowledge Bases and Be Informed for the FAA Semantic Knowledge Bases and Be Informed for the FAA

What Do You Want —Semantic Understanding? - . (you’ve got to be kidding). david w. embley brigham young university.

COMPSCI 732: Semantic Web Technologies - . semantic web architecture. where are we?. overview. introduction and

Chapter 17: Chemistry of Acids &amp; Bases - . 17.0 objectives. 1. to recognize the properties of strong and weak

What Semantic Web researchers need to know about Machine Learning?