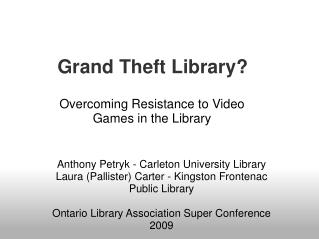 Today’s Producers - Thanks to the generous support of the following state library agencies, webjunction offers webinar

Welcome to Safety, Shopping and Security on the Internet - Presented by the east hampton library and sharper training

The Catalog - . vs. the homepage. best practices in connecting to online resources. georgia briscoe, university of

The ABC’s of Identity Theft - . part one in a multi-part series of overviews on disaster avoidance, business continuity