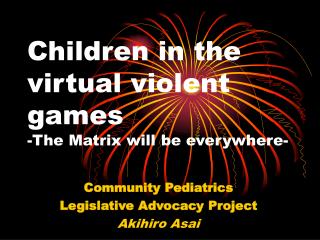 Children in the virtual violent games -The Matrix will be everywhere-

Children in the virtual violent games -The Matrix will be everywhere-

The Olympic Games - . the olympic flag. five rings are joined together as a sign of friendship. the summer olympic games.

Video Game Addiction - . the knights diamoneek mcdougald. what is it?. video game addiction is someone who constantly

Understanding the time-dependent social pathways to violent extremism, and Intervening at appropriate junctures to turn

The Matrix as Metaphysics - . david j. chalmers. the matrix. in the matrix neo is hooked up to a giant computer

GAUSS ELIMINATION AND GAUSS-JORDAN ELIMINATION - . an m  n matrix. if m and n are positive integers, then an m  n