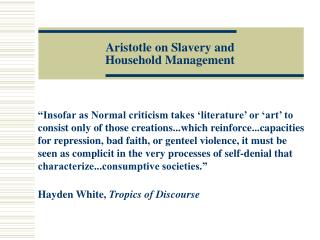 Aristotle on Slavery and Household Management

Aristotle on Slavery and Household Management.

Aristotle on Slavery and Household Management

Abolition - . the movement to end slavery. abolitionist. a person who supported abolition, or the ending of slavery.

Claudius Ptolemy - . saving the heavens. logic at its best. where plato and aristotle agreed was over the role of reason