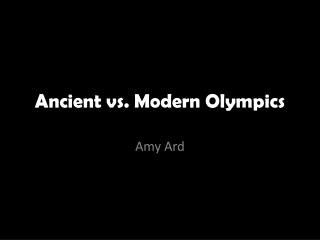 Ancient vs. Modern Olympics Amy Ard Modern Olympics The Modern Olympic flag of five linked rings, each with a primary color used in the flags of the nations competing in the games, was introduced in 1908 . Gold, Silver, and Bronze medals are awarded to winners of each event.

The Story of the Olympic Games - . a journey to ancient greece. no one is sure how the olympic games really began, but

Ancient Greece - . by: monahh brown. government. the greeks had a lot of different kinds of governments, because there

OLYMPICS - . by ella &amp; ellie . click on me!. help!. if you come across a blank page just press enter or click

The Olympics: Then and Now - The earliest recorded date in history for the olympics. ancient olympic games lasted from

Ancient Olympics - The first olympic games that historians can document took place in 776 bc in greece. participants

Teaching the Olympics - My books- learning to go https://gumroad.com/l/learn2go & the 30 goals challenge for teachers