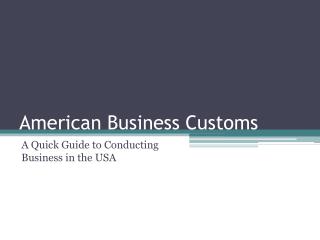 American Business Customs. A Quick Guide to Conducting Business in the USA. Cultural Context. Geert Hofstede ™ Cultural Dimensions 1) Power Distance (PDI) - the extent to which the less powerful members of organizations and institutions accept and expect that power is distributed unequally.

Common Business Etiquette - To be a good business man, must have to maintain proper professionalism. you will be judged

Business etiquette - . “etiquette is what you are doing and saying when people are looking and listening. what you are

Dining Etiquette - . today we hope you.... walk away with 3 important tips: table manners play an important part in

Traditions and Customs of The United States of America - . thanksgiving. presentation by: joseph lin economic officer

Business etiquette - . presented by by the office of career development