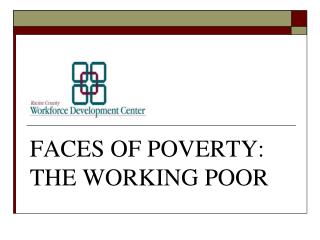 FACES OF POVERTY: THE WORKING POOR

FACES OF POVERTY: THE WORKING POOR

Poverty - By nikita, sara, rachel. poverty. what are the 6 basic needs?. suzanne (safety) wished (water) for (food) some

Lyndon Baines Johnson chapter 22 - . “when i was young, poverty was so common that we didn't know it had a name.”

Poverty - . trevor staff, rebecca macdougall, haley claxton. what is poverty?. poverty is the pronounced deprivation of

FACES OF POVERTY: THE WORKING POOR - . agenda. define “working poor” overview of the wdc profile of the working poor

Poverty - Natasha, mercedes , jessica, jamie &amp; rachell. poverty. what is poverty. poverty is not having enough

Inanimate alice - . by claire &amp; diandra. you have to play the game in this story if you want to continue. don’t