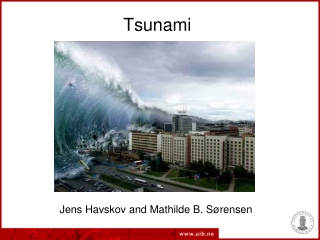 Tsunami. Jens Havskov and Mathilde B. Sørensen. A tsunami is an abnormal large wave hitting the coast. What is a tsunami. A surf wave can be considered a small tsunami. Danger of tsunami waves. Tsunami generation by an earthquake. Tsunami generation in a subduction zone.