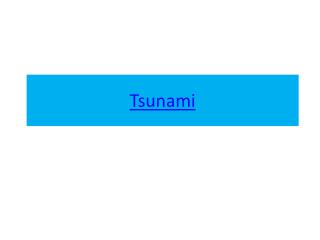 Tsunami. Why did the earthquake cause a tsunami ?. Shallow focus earthquake Large volume of oceanic crust displaced The movement of the crust also displaces a large volume of water. Tsunami. One wave moves toward the shoreline, another travels into the open. Tsunami - . what is a tsunami?. a tsunami is a series of ocean waves that are usually caused by earthquakes. the word

Tsunami - . a wonderful country. with great people. how amazing it was. something that could be changed forever. tsunami

tsunami - The nearby town of leupung has been obliterated by the tsunami. ... also, the arrival of a tsunami is marked by

Tsunami - . by alexandra busato april is tsunami awareness month!. origin of the