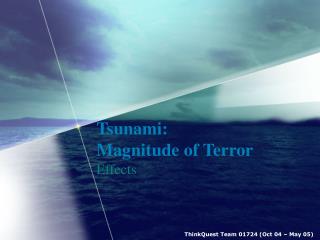 The nearby town of Leupung has been obliterated by the tsunami. ... Also, the arrival of a tsunami is marked by a huge receding wave, which would ...

TSUNAMI - . tsunamis. learning objectives: to develop your understanding of the term tsunami. to be able to identify the

Tsunamis - . what is a tsunami ?. a tsunami is a very long ocean wave generated by sudden displacement of the sea floor

Tsunami - By maggie sagui. tsunami. what happens during this natural

Tsunami. - Tsunami. how. a tsunami can be caused by an earthquake under the ocean, or a meteorite landing in the sea. .

Tsunamis - . tsunami. a tsunami is a wave train, or series of waves that is generated in a body of water by an impulsive

Tsunami - . what is a tsunami. a tsunami is a series of huge waves that happen after an underwater sea disturbance such

The Tsunami - . japan’s natural disaster a very tragic loss. how a tsunami is formed. japan’s tsunami area. some

Six years after Fukushima - On march 11, 2011, a 9.0 magnitude earthquake set off a massive tsunami and meltdowns at the