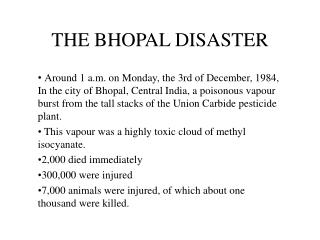 THE BHOPAL DISASTER. Around 1 a.m. on Monday, the 3rd of December, 1984, In the city of Bhopal, Central India, a poisonous vapour burst from the tall stacks of the Union Carbide pesticide plant. This vapour was a highly toxic cloud of methyl isocyanate. 2,000 died immediately Bhopal: A Legal, Environmental and Human Disaster - . “a hand in things to come ” union carbide comes to india :

Bhopal - Landlocked in the central part of the country , madhya pradesh is bordered by the states of rajasthan to the

YELLOW BHOPAL .COM The Market Place Of Bhopal - . executive members. about our

The Heart Of India: Bhopal - There are also many places to eat in bhopal, which offer traditional rajasthan food,

Invest in Bhopal Properties - GoThrough Properties, Bhopal - Go through properties helps you to invest in bhopal

The HIH Disaster - . hih. hih was 2nd largest general insurer in australia majority of business in australia but also