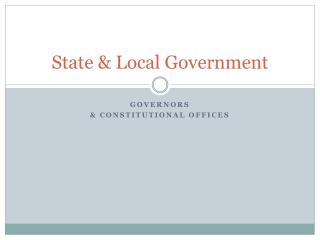 State & Local Government. Governors & Constitutional Offices. Early Characteristics. The first state constitution, ratified in 1836, established four-year terms for governors and the requirement that they be residents of the state for ten years. State Succession - . kevin iraniha. state succession. definition brownlee: replacement of one state by another in respect

I. State and Nation - . a. state: political unit (can be used interchangeably with country ) b. nation: refers to a

CHAPTER 2 : THE ROLE OF STATE IN INDUSTRIAL RELATION - Definition of the