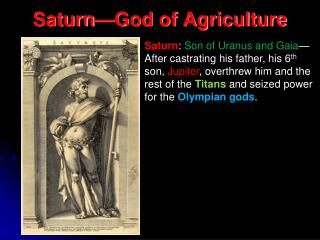 Saturn—God of Agriculture. Saturn : Son of Uranus and Gaia —After castrating his father, his 6 th son, Jupiter , overthrew him and the rest of the Titans and seized power for the Olympian gods . Saturn—As Seen From Earth. Saturn—Voyager 2 in 1981. Notice:. Internal Structure. Government of Jammu and Kashmir Directorate of Agriculture Kashmir - . national conference on agriculture for rabi

Agriculture Road Map of Bihar - . a presentation on rastriya krishi vikas yojana. &quot;agriculture not only gives

Agriculture in Malaysia - . the era of agricultural development in malaysia: the early years (1960’s-70’s) the

STATE ACTION PLAN - BIHAR – FOR THE YEAR 2009-12 - A presentation before ministry of agriculture, government of india.

STATE ACTION PLAN - BIHAR – FOR THE YEAR 2009-12 - A presentation before ministry of agriculture, government of india.

Department of Agriculture Government of Maharashtra - National conference on agriculture . for. kharif campaign 2008.

Soil, Food and Agriculture Chapters 14 a nd 23 - . soil: the foundation for agriculture. soil is a thin covering over

Cassini Mission - . a journey to the saturn system. saturn. saturn is the sixth planet from the sun, orbiting at an