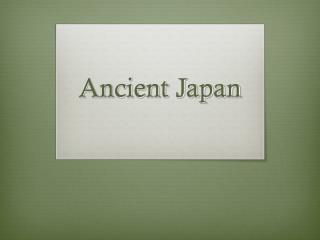 Ancient Japan. Japan – Geography. Japan consists of four large islands and thousands of smaller ones Japan faces China & Korea to the west and the Pacific Ocean to the east Japan is part of an archipelago Japan has extreme climates Snow in islands to the north Ancient Japan - . early in its history japan was influenced by _________ . since japan lies just across the sea, elements

ANCIENT JAPAN - . vocabulary. clan a group of families who trace their descent from a common ancestor led by a chief.

Ancient Japan: Government and Laws - . by jessica xu. the first emperor. by legend, japan’s first emperor was the son

Status of Women in Ancient Japan - . by: gracie wang, amy liu, and andrew wang. the important question what was the