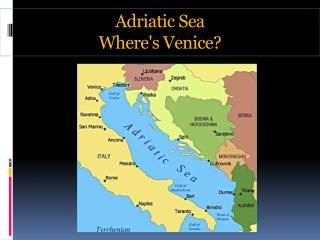 Adriatic Sea Where's Venice?. Venice is a Heritage City. People come from all around the world to admire the city ’ s heritage, which includes 16 000 works of art, 400 palaces, 100 churches and 30 convents. Millions of tourists visit Venice each year. Venice, Italy - . this presentation is brought to you by cindy rose. for ernst schuegraf. november 18, 2005. venice is

Organic olive production in the Northern Adriatic region with specific emphasis on the Slovenian Istria - . dane

The Lagoon of Venice: Popular, yet threatened - . venice is a heritage city. people come from all around the world to

Adriatic - From stettin in the baltic to trieste in the adriactic, an iron curtain has descended across the continent. -

The Merchant of Venice - . by william shakespeare. sources. the merchant of venice combines two folk-tales: the story of

The Merchant of Venice - . the application of major themes to society . major themes. self interest versus love divine

Community Data 2.0: Venice - Perspectives on the community. community data 2.0: venice. co-hosted by the city of venice,

NEH 2006 Venice, the Jews and Italian Culture - . neh 2006. voices from the ghetto of venice and other italian jewish

SHAKESPEARE The Merchant of Venice - . “the quality of mercy is not strain'd, it droppeth as the gentle rain from

WELCOME TO VENICE - . a capital for art and for micropiles (also an art). a brief history of venice. basilica of san

Venice - . let's take a view at one of the most beautiful cities in the world, venice. venice is the city of

Venice - . matej baňas. venice. is a city in northern italy venice is city of canals and lagoons i t is the capital of

‘Restoring Venice’ A Response to the ‘Call for New Evangelisation’ in Catholic Schools - . diocese of armidale -