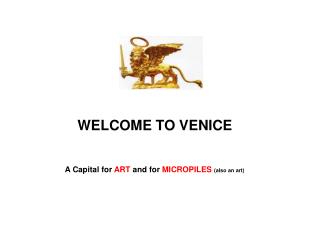 Free Venice City Tour will guide you to discover secret itineraries in Venice - We assure you that, during our walking

The art of the Venice Biennale - Highlights from the 57th biennale international art exhibition in venice,

Giethoorn – Venice of the Netherlands - . a village in holland... with no roads at all !!!!!!!. netherlands statistics.

A Day at Venice - . by: khalid. venice from the ocean. vince is a city in italy. it has the center of enormous trade, it

Antonio Vivaldi 1678 –1741 Venice, Italy Nickname = The Red Priest - Because he had red hair and he was baptized at an

Investment Overview: - How to approach from a small to medium government’s perspective – given limited staff, time,