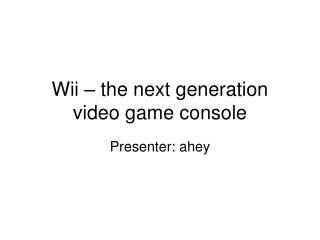 The beautiful game - A celebration of soccer's next

Video - . chapter 17. overview. in this chapter, you will learn to explain how video displays work select the proper

Chapter 8 The X-ray Machine - . the console is the part of the machine that the operator controls the operation of the

Get Your Game On! Video Games in the Library - Presented for connecticut state library by beth gallaway may 16, 2006