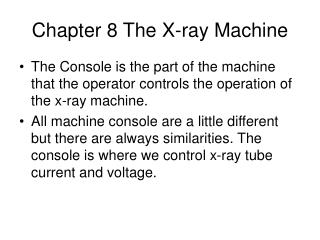 Chapter 8 The X-ray Machine. The Console is the part of the machine that the operator controls the operation of the x-ray machine. All machine console are a little different but there are always similarities. The console is where we control x-ray tube current and voltage. The Console Controls.

COMPUTER HARDWARE - 2. chapter. computer hardware. objectives of this chapter:. you can…. define input and output. list