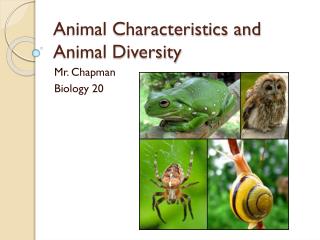 Animal Characteristics and Animal Diversity. Mr. Chapman Biology 20. Animals are Physically Diverse. Animals are the most physically diverse kingdom of organisms. Animals can be found nearly everywhere on earth, including some places in which plants and fungi do not live.

Animal diversity Ch 32 - . overview: welcome to your kingdom. the animal kingdom extends far beyond humans and other

24.1 Animal Characteristics - . i. general animal features. a. our ancestors are: 1. eukaryotic 2. multicellular 3.

Animal Diversity Essay - . feedback. describe briefly in one sentence. the reason why animals need to carry out this

Introduction to Animal Diversity - . chapter 32 - 34. classification. to be in the kingdom animalia : eukaryotic

Animal Diversity - . exploring the categorization of animal species. the tree of life the three domains of life