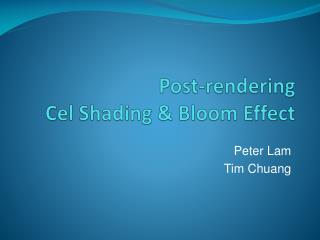 NAME THAT ‘TOON - . write down the name of the cartoon as soon as you recognize it and raise your hand. do not talk

Animation - . â€œanimation offers a medium of story telling and visual entertainment which can bring pleasure and

CSC 830 Computer Graphics Lecture 5 Shading - . course note credit: some of slides are extracted from the course notes of