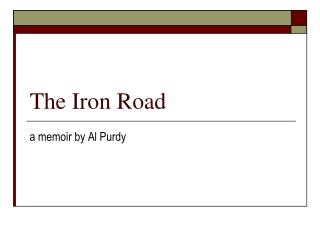 The Iron Road. a memoir by Al Purdy. Riding the Rails. The Diagnosis and Treatment of Iron Deficiency in Primary Care: 34,741 CBCs Reconsidered - . or. what i learned from 55

The Road to Licensure - . where we are in the journey. how did we get to where we are now?. symposium and summit frid

Chem I - . semester 2 review. 2. all of the following are general characteristics of a substance in the liquid state

Metal Casting Processes - . considered to be the sixth largest industry in the usa copper smelting technique around 3000

IRON DEFICIENCY ANEMIA &amp;THALASSEMIA - . b major thalassemia. anemia. it is a reduction of the red cell volume or

Heavy Metals - . iron. ingestions of pediatric multivitamin formulations are the most common iron exposures. iron. these

Effects of electronic correlations in iron and iron pnictides - . a. a. katanin in collaboration with: a. poteryaev , p.

Rating the Road for Vulnerable Users - . february 17, 2011. road crashes are one of the top three causes of death for 5